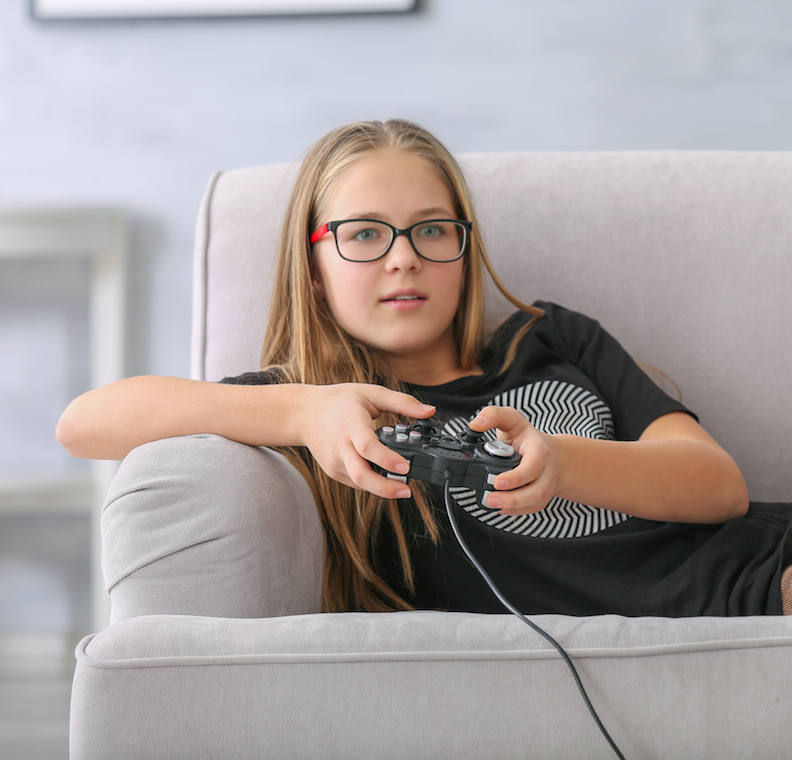 Pac-Man, Mario Bros., Tetris. Video games have changed since we were kids. Now there are first-person games, multi-player online role playing games and multi-user domain games. Kids today can play online with people across the world or watch others playing the same game on YouTube. The growth of technology is astounding and therefore, so is the access.

Unfortunately, some kids can find themselves increasingly addicted to the video game culture. According to recent research, more than 8 percent of U.S. children are addicted to video games. “Internet Gaming Disorder” is now listed as a psychological condition. If your tween appears preoccupied with the game, is playing it more often, and cannot control or limit his game time, it is possible he might be addicted. Parents may also notice warning signs such as poor academic performance, depression and anxiety, and spending less time with friends and family in order to play the game.

A study published in the journal Pediatrics likens video game addiction with other types of addiction. Authors studied more than 1,000 children in grades three through eight and found depression, anxiety, social phobia and lower school performance as results of pathological gaming. Depending on the type, gaming can also shrink or expand the hippocampus, the area of the brain associated with spatial navigation, stress regulation and memory.

Parents can reduce the child’s risk of addiction by setting boundaries on game time. Karla Roberts, mother of two teenagers, said her 13-year-old son enjoys playing video games, but she notices a change in behavior when he plays for too long. “I know when he’s playing too much when he’s more moody, snippy and anxious,” she said. “More than two hours per day is way too much. It’s too stimulating. Getting him outside seems to be the best remedy.” Roberts said she limits him to around an hour a day and gives him a five-minute warning before it is time to end his game. Now that he is getting older, he tends to regulate himself when he has had enough game time.

Find a reasonable amount of time to allow your tween to play his game. According to the American Academy of Pediatrics, doctors recommend children in this age group should have consistent limits on time spent using any type of media, including video games. While a specific amount of time is not addressed, media should not take the place of adequate sleep, physical activity and other behaviors essential to health. An Oxford University study noted that children who play an hour or less per day tend to be more social and happy than those who do not play video games at all. When a child spends more than three hours per day on a game, it can lead to hyperactivity, poor attention span and poor social skills.

Provide your tween with other healthy outlets. A tween’s recreational activity should also include outside play time, such as exercise, bike riding or sports. In the case of bad weather, encourage your tween to read, do something creative or play a board game with other family members. Parents should also make sure the child has met his other responsibilities, such as homework and chores.

When your tween plays his video game, that is all he should be doing. In other words, do not allow him to eat his dinner in front of the TV or computer or play on his smartphone while trying to go to sleep. Doing so will distract his brain from mindful eating or getting a restful sleep.

Talk to your tween about cyberbullying

While your child might enjoy playing online with his buddies, sometimes a cyberbully or, worse, a predator may find his way into the game. Teach your tween how to handle these situations. Let him know that people are not always who they appear to be and to never send personal information (real name, age, address, phone number) or pictures to anyone he does not know in real life.